What is the best beer making kit for brewing your first sour?

Home > Homebrew Basics  > What is the best beer making kit for brewing your first sour? 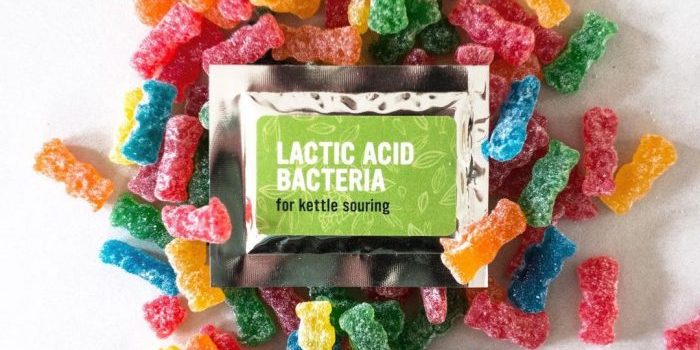 29 Jun What is the best beer making kit for brewing your first sour?

Posted at 17:49h in Homebrew Basics by Kaley
2 Likes
Share

What is the best beer making kit for brewing your first sour?

Love sour beers? Want to learn the art of the tart brew? Don’t know where to start? Then you’ve come to the right place! In recent years American craft beer drinkers & brewers have become fascinated by these acidic, funky fermentations and continue to experiment and push the limits of the style. 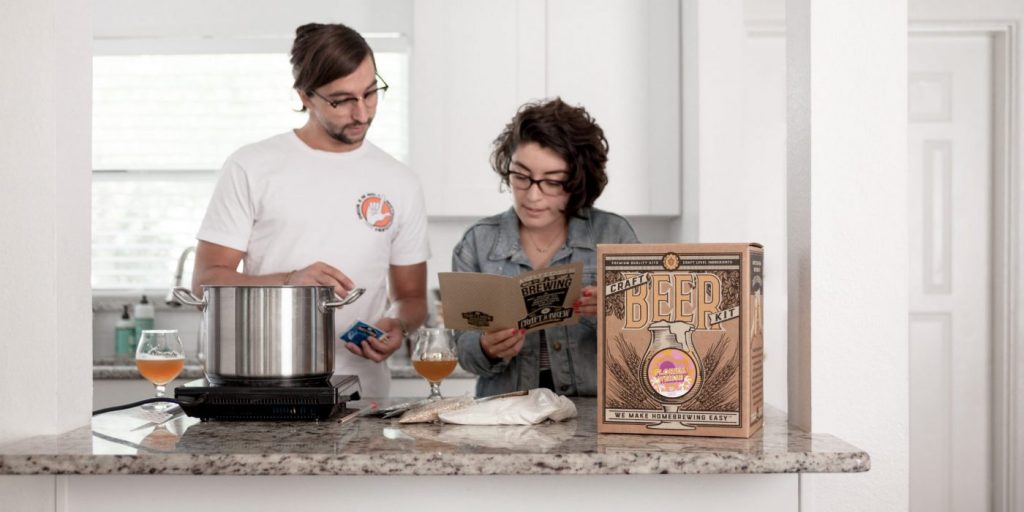 If you’re hooked on sours & interested in crafting your own, it’s wise to learn the ropes with an approachable, all-in-one beer brewing kit (like Craft a Brew’s 1 gallon Florida Weisse sour beer kit). A comprehensive kit ensures that you have all the proper equipment, specialty ingredients and step by step instructions to craft an impeccable tart beer.

Before we compare & determine what is the best beer making kit for your first sour, we’ll review just how sour beers are made, review the anatomy of a sour & a few important styles. It’s important to understand the process before you embark on your sour brewing journey (and you’ll quickly see why a complete, user-friendly beer making kit will be so essential for your first try).

How does a beer become sour? 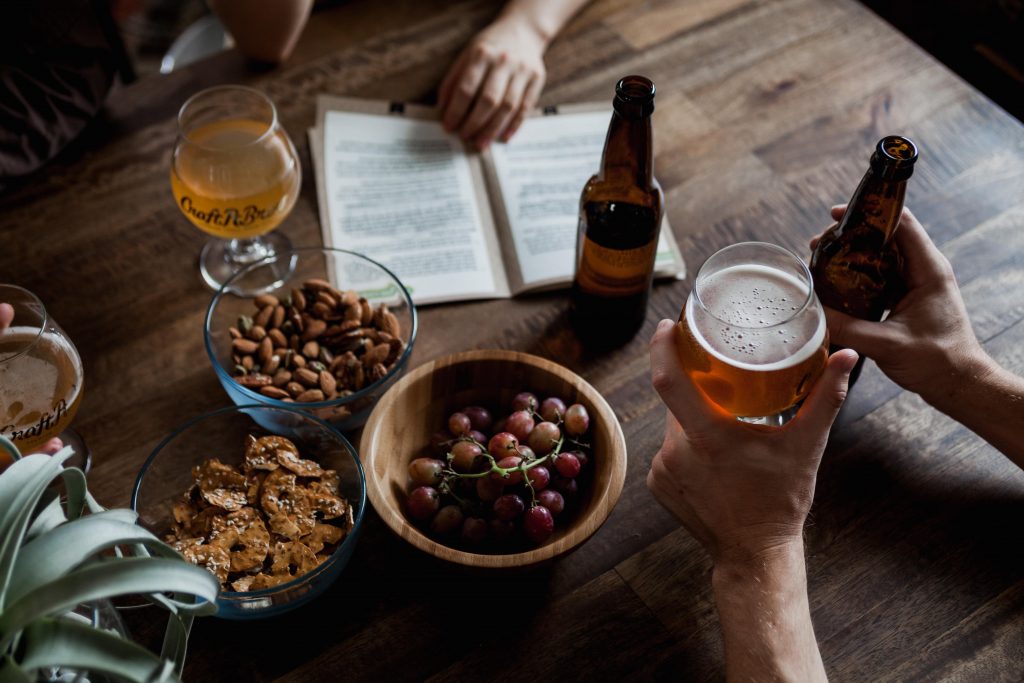 Described as tart, sour, funky, acidic, vinegar-y and beyond, sour beer character varies from style to style, as do the techniques to brew them. “Sour beer” is a sort of blanket term that encompasses numerous styles: Lambic, Flemish Red, Gose, Berliner Weisse and modern American sour ales.

So how, exactly, does a beer get sour? What’s going on in the beer making process to change the flavor so much? 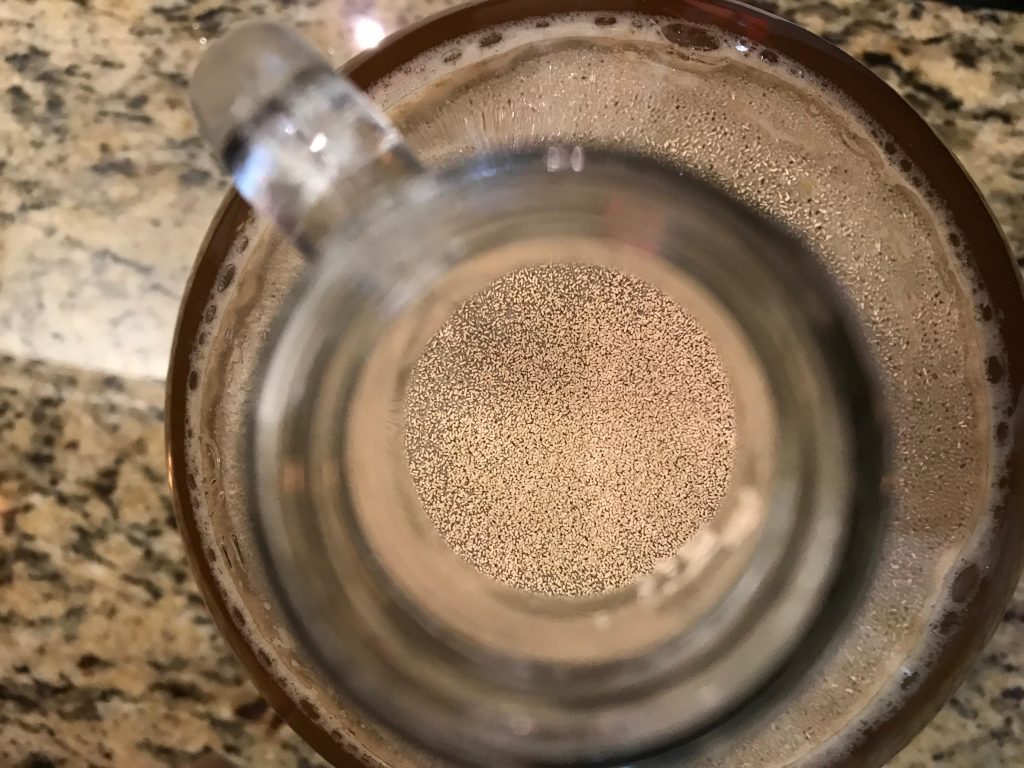 During fermentation, yeast (a living organism that’s technically a fungus) convert sugars from malted barley into alcohol and CO2. This is why sanitation is often regarded as THE most important step in the homebrew process: you want to make sure the yeast is the only organism present in the beer.

This is where sour beers flip the script! Bacteria is deliberately added (kettle souring) OR receives an open invitation (spontaneous fermentation) to the beer making process in order to create sour flavor.

“Sour” flavor is our palate’s perception of acidity in beer. Acids created by bacteria (the good kind) like lactobacillus are what you taste when you sip on sours. Lactobacillus is in fermented foods like tangy yogurt & tart kombucha. It’s also naturally occurring in our digestive systems. When added to wort (sugary, unfermented beer) lactobacillus converts those sugars into lactic acid, which is responsible for that tart taste.

In a situation where unwanted bacteria get into your brew – usually through improper sanitation – wild bacteria can quickly contaminate a batch, making it undrinkable. Acetobacter bacteria will convert sugars into acetic acid (like the acids in vinegar). This isn’t so bad in small amounts, but is considered to be an off flavor in beer and is perceived as vinegar on the palate. Though, in some sour beers – like lambics – acetic acid can be a welcomed flavor. 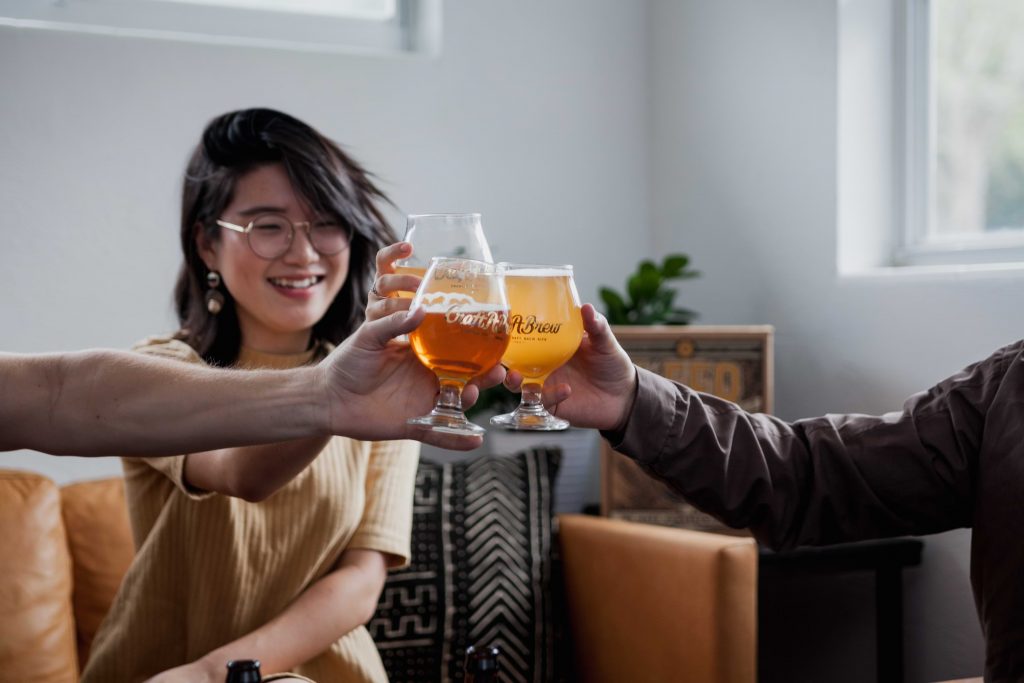 There are 2 main ways to craft a sour beer. The first is open or spontaneous fermentation, which relies on wild yeast and bacteria in the air & environment to inoculate the wort.

Just like wines vary region to region due to “terroir,” (the natural environment, including soil & climate) spontaneously fermented sour beers are a product of the place where they’re made. This technique relies on wild yeast & microbes in the air to land in the wort as the beer cools in shallow, open vessels (think large bathtubs).

Spontaneous fermentation is quite unpredictable and can be extremely slow, requiring several months or years before a beer is ready to enjoy. This method is NOT recommended at the homebrewing level, as you’re more likely to invite unwanted wild bacteria into your beer and create an undrinkable brew.

This traditional Belgian style is a perfect example of spontaneous fermentation. True, authentic lambics are only produced by a few remaining breweries in Belgium, like Cantillon. The brewery gladly welcomes wild yeast & bacteria inside through open windows and cool Belgian air. These “bugs” in the region are responsible for the cidery, sour lambic character. The brewhouse and its barrels, teeming with microorganisms, and even its cobwebs are just as much a part of the fermentation process as the malts & hops. 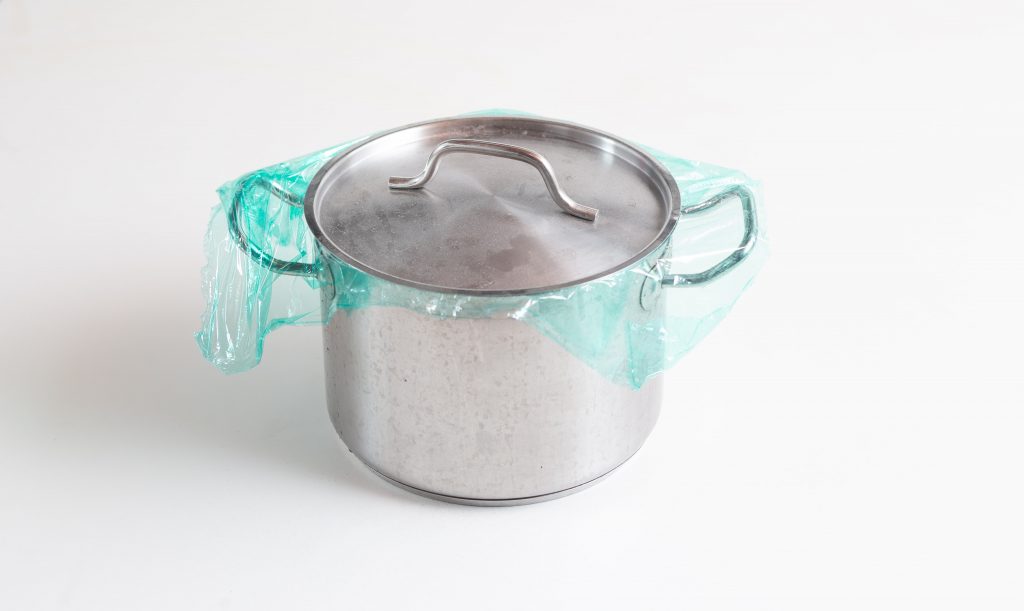 Many modern sour ales are created using a much quicker method called Kettle Souring. This technique gives the brewer much more control over the process, timing and flavor. It’s widely used by homebrewers and commercial craft breweries alike for its efficiency and clean sour finish.

Lactobacillus (lactic acid bacteria) is added to sugary wort – freshly brewed & chilled – before hops or yeast are added. The bacteria can come in dry, liquid, or even tablet form.

In the securely sealed kettle, using plastic wrap & a lid to keep other bacteria out, lactobacillus feasts on fermentable sugars for 1 to 4 days. A longer kettle sour will produce more lactic acid & tart flavor. After kettle souring, wort is boiled again to kill the bacteria and lock in its sour taste. Then the yeast can be safely added to begin fermentation. 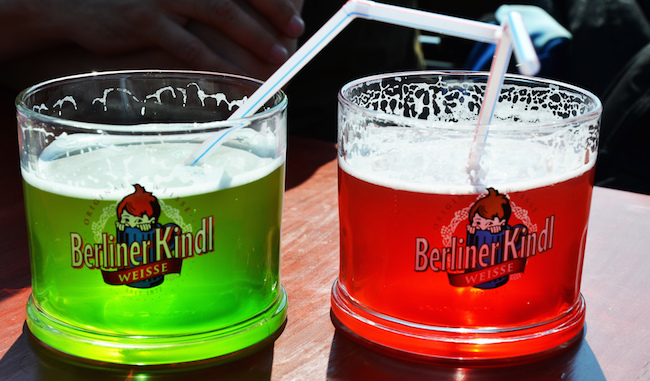 Originating near its namesake city, German Berliner Weisse is the sour beer style that has inspired much of the American craft beer community’s sour beer pursuits. Because this style is crafted using lactic acid bacteria, Berliner Weisse is much easier to replicate (and experiment with). It’s defined by its low ABV, gentle tartness and clean finish. Traditionally, Berliner Weisse is served alongside fruit or berry syrups to add sweetness and balance the sour flavor. 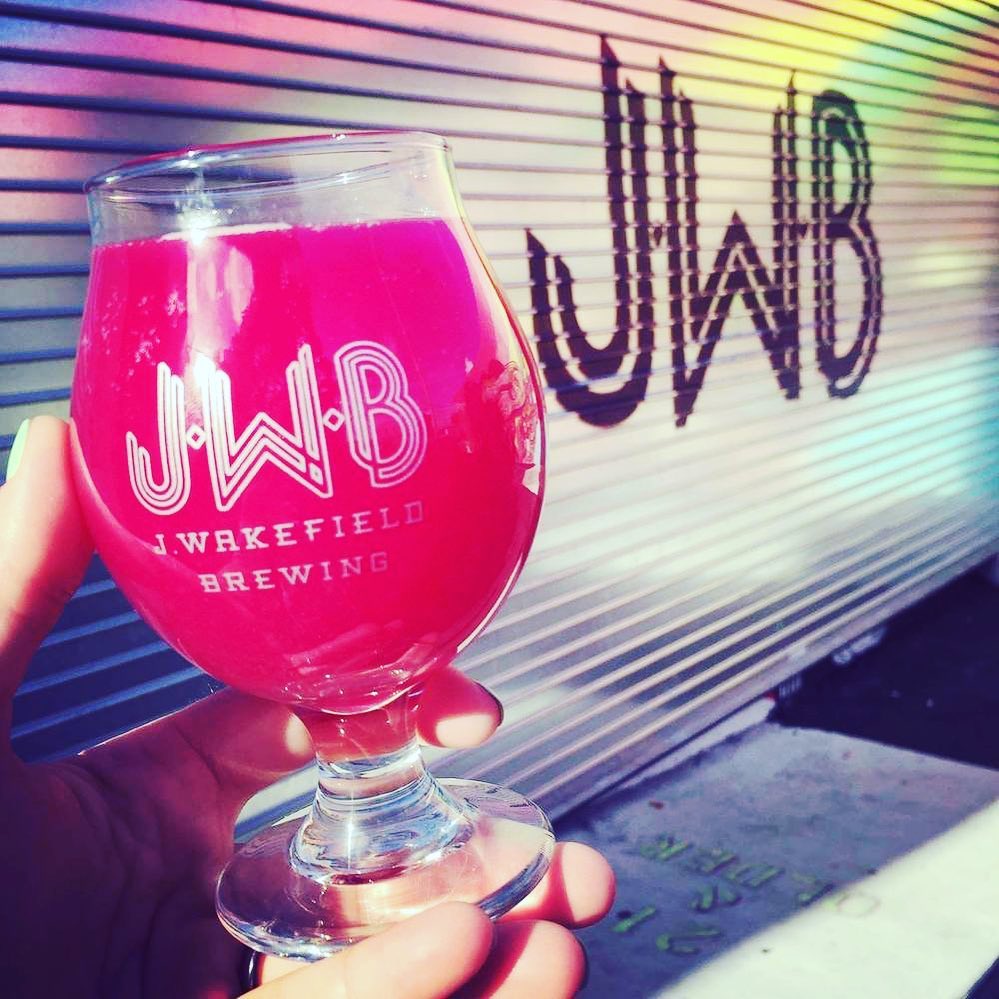 While sour beer styles have been around for centuries throughout Europe, here in America we’re still learning, experimenting & creating our own rules as we explore the possibilities of sours. We’re crafting our own interpretations of traditional styles that incorporate exciting ingredients like hibiscus, dragon fruit, lactose (“pastry sours”) or loads of hops (sour IPAs). A prime example of an American take on a classic sour: the Florida Weisse.

Brewed in 2009 by Doug Dozark, the first Florida Weisse – “Rainbow Jelly Donut” – featured lime zest and whole fresh raspberries. The combination of high fruit content and bright acidity make for a style that people hadn’t seen in the craft beer community yet.

The style takes inspiration from the fruity syrups traditionally served with Berliner Weisse. But Florida Weisse is defined by indulgent use of tropical fruit during the beer making process – often featuring varieties that can only grow in our humid climate. Several pounds of vibrant fruit per batch produce signature electric colors in your glass.

How to brew your own sour beer

So with all this newfound knowledge, you’re probably wondering “How do I scale down the souring process at home? What is the best beer making kit to use for my first sour? How do I get my hands on lactic acid bacteria?” Let’s get into it!

What is the best beer making kit to use for your first sour?

Embarking on your very first homebrew, especially if it’s a sour beer, means there are a lot of variables and important steps involved. Make things easier and guarantee a fantastic finished beer by using a comprehensive kit. 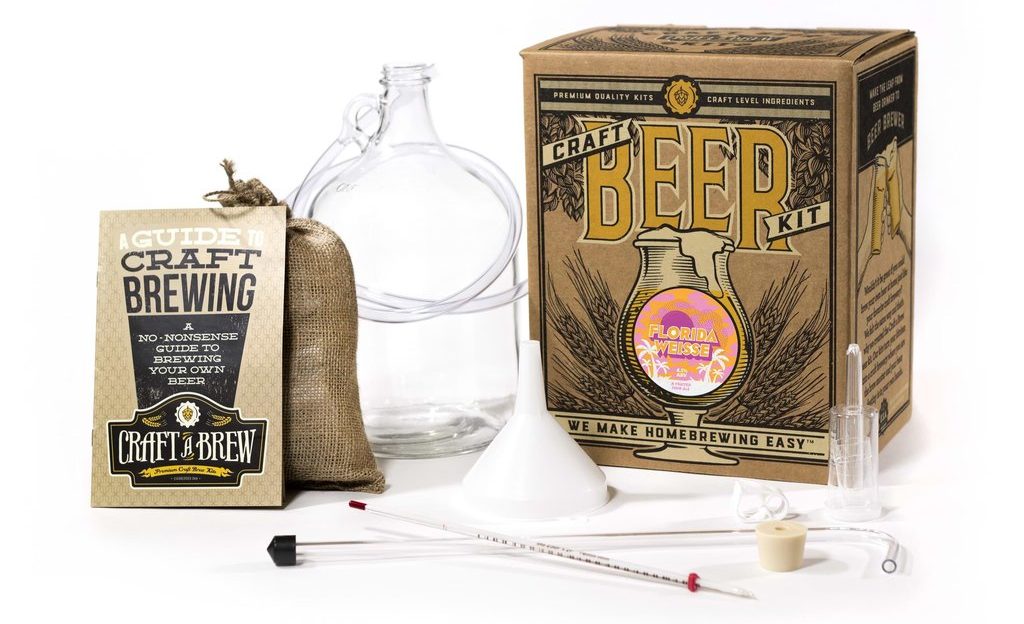 There are only a handful of DIY sour beer kits on the market & surprisingly many of them don’t actually include everything you need to brew & kettle sour, meaning you’ll have to source your own yeast, sanitizer, or even find your own bacteria. We’ve compared the top sour beer kits currently available so you can determine the best one for your first homebrewed sour:

What is the best beer making kit for your first sour based on all these variables? We think Craft a Brew’s Florida Weisse 1 gallon sour beer kit is ideal for the new brewer because it includes everything you need to get started & you won’t be nickel-and-dimed for every ingredient or component required of a sour. Everything is included in the price, in one box for convenience and confidence as you kettle sour your first beer. The equipment in this kit is also reusable for future batches & the instructions in the kit teach you how to brew with fruit! 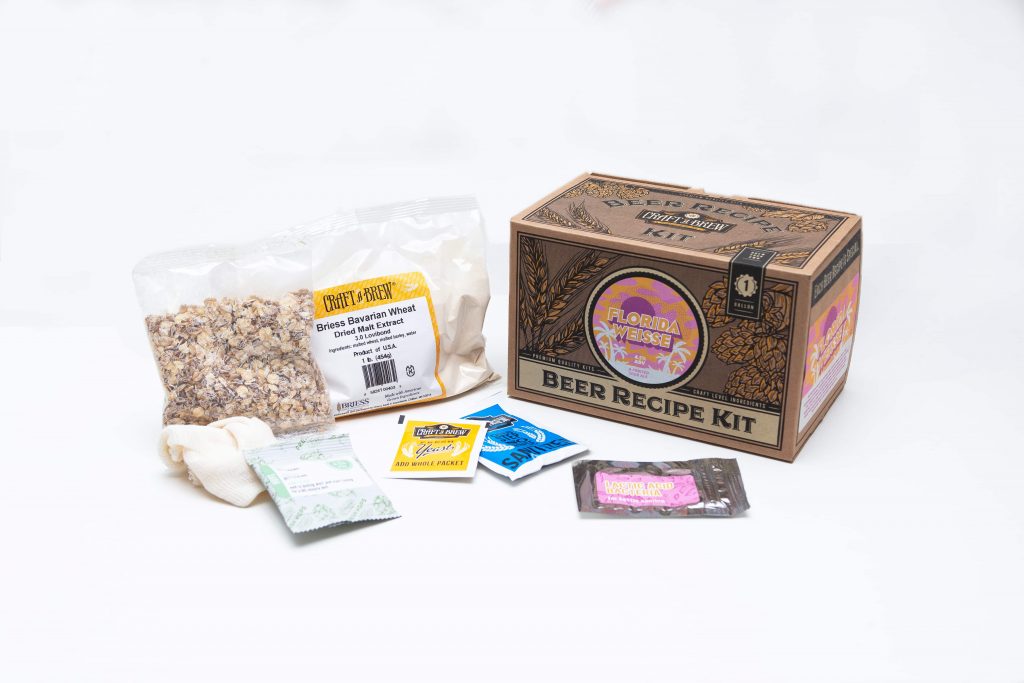 This 1 gallon beer brewing starter kit comes with ingredients, sanitizer & reusable equipment to brew your first beer & many more after that. A 1 or 5 gallon recipe kit includes the items in bold:

What else will you need?

Step-by-step instructions for brewing your own Florida Weisse

Craft a Brew’s Florida Weisse beer brewing kit includes user-friendly instructions, but here’s an overview of the process along with notes on choosing fruit & a few pro tips to help you brew your best sour on the first try.

We find that bright tropical fruit yields the best results. Try vibrant raspberries for a pinkish red hue, blueberries for a purple-y red pour or mango for a rich golden yellow color.

We recommend using 0.5 Lb – 1 Lb of fruit per gallon of beer (that’s 2.5 – 5 Lb for a 5 gallon batch). If you don’t have access to fresh, whole fruit you can certainly use alternatives: frozen fruit, pre-made purees or 100% fruit juice. 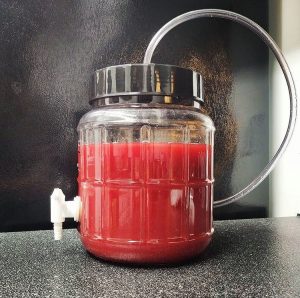 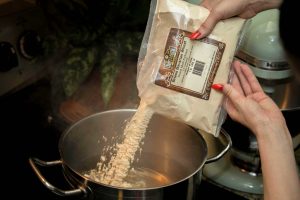 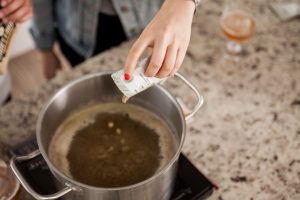 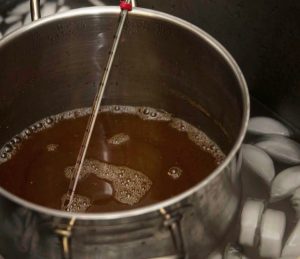 PRO TIP: If you have one, try pouring wort through a fine mesh strainer to separate hop debris and kettle sludge from the wort.

PRO TIP: After aerating you should avoid agitating or shaking your fermenter any further in order to avoid oxidation. Aeration is good, while oxidation is bad. It can cause stale off-flavors in your finished brew. 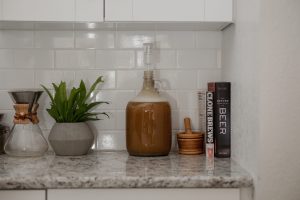 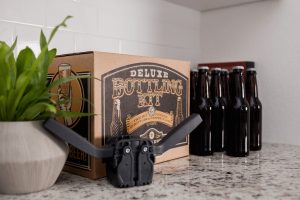 PRO TIP: Siphons are much easier with a friend to help. If you like brewing solo, try a mini auto-siphon. WIth a few pumps this tool starts the flow for you. The best $10 you’ll ever spend.

The next 14 days: Bottle Conditioning 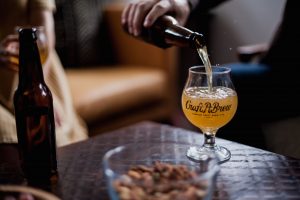 If this post has you feeling thirsty for a homebrewed sour, shop Craft a Brew’s Florida Weisse beer making kit today!

Learn more about Craft a Brew’s extract beer kits on the blog: “What is an extract beer kit?”, “Choosing The Best At Home Beer Brewing Kit” & “How to use a beer making kit – homebrewing 101.”